Keeping up or starting up server activity - A guide

Our servers are open 24/7, but are often left alone unless enough folks around enough to assemble a group together to play. In order to help folks assemble games together, we offer a number of ways to do so!

On discord, you can use the /role command to toggle access to special ranks that allow you to ping or be pinged for events. For example, the tf2_an role can be used to notifiy others about SCG TF2 events.

Note : Folks who abuse this role to spam announcements will have their access removed. This role is also only meant for SCG servers directly, we ask that it not be used to advertise outside / unrelated events or servers.

We offer a Telegram announcement group that will display messages regarding active SCG servers. https://t.me/scgservices When a server is considered active, a message will appear in that channel and will update every ~5 minutes with the current player count / map until the server is no longer active, then the message will be deleted.

Similarly, these messages will appear in the Discord as well, for their related channel!

Good afternoon, everyone! Wanted to drop by with a few quick updates to our Discord~!

Waiting room changes
To protect against isolated raid attacks, all entries into the SCG Discord need to be manually approved by an admin. This changes come after an extremely small (2 people) but abhorrant attack on our community. In order to keep people safe, we will check each and every new person added. Do note that this may cause an inconveinence when friends are given invite links for spontaneous events!

When approving new members, we will check to see if accounts feature things like avatars, attached social media and so on. New members are given a chance to explain how they found our community, or whom they may know inside. Accounts that seem to have joined randomly without any real idea of who we are or haven't ever played on our servers will most likely not get in.

Other things of note!
Previously, the commands for the discord were changed to use slash commands, this is another reminder of that!

Edits:
This post was updated on 11/07/2021 to reflect changes to the welcome room now requiring manual admin approval.

Hey folks! It is that time of year yet again!

The 9th annual SCG Halloween Group Icon contest! The rules are simple, you must create a group icon that we will use for the month of October!

They will not be judged on artistic merit, instead they'll be judged on originality and creativity! Everyone is encouraged to participate, even if you don't try all that hard!

Submissions will be accepted until the 13th of October at 11:59PM Pacfic Time! To toss in your icon, just reply to this thread with it! Or toss it over to my email, [email protected] with the subject "Halloween 2021"

Let's take a look at our previous winners! 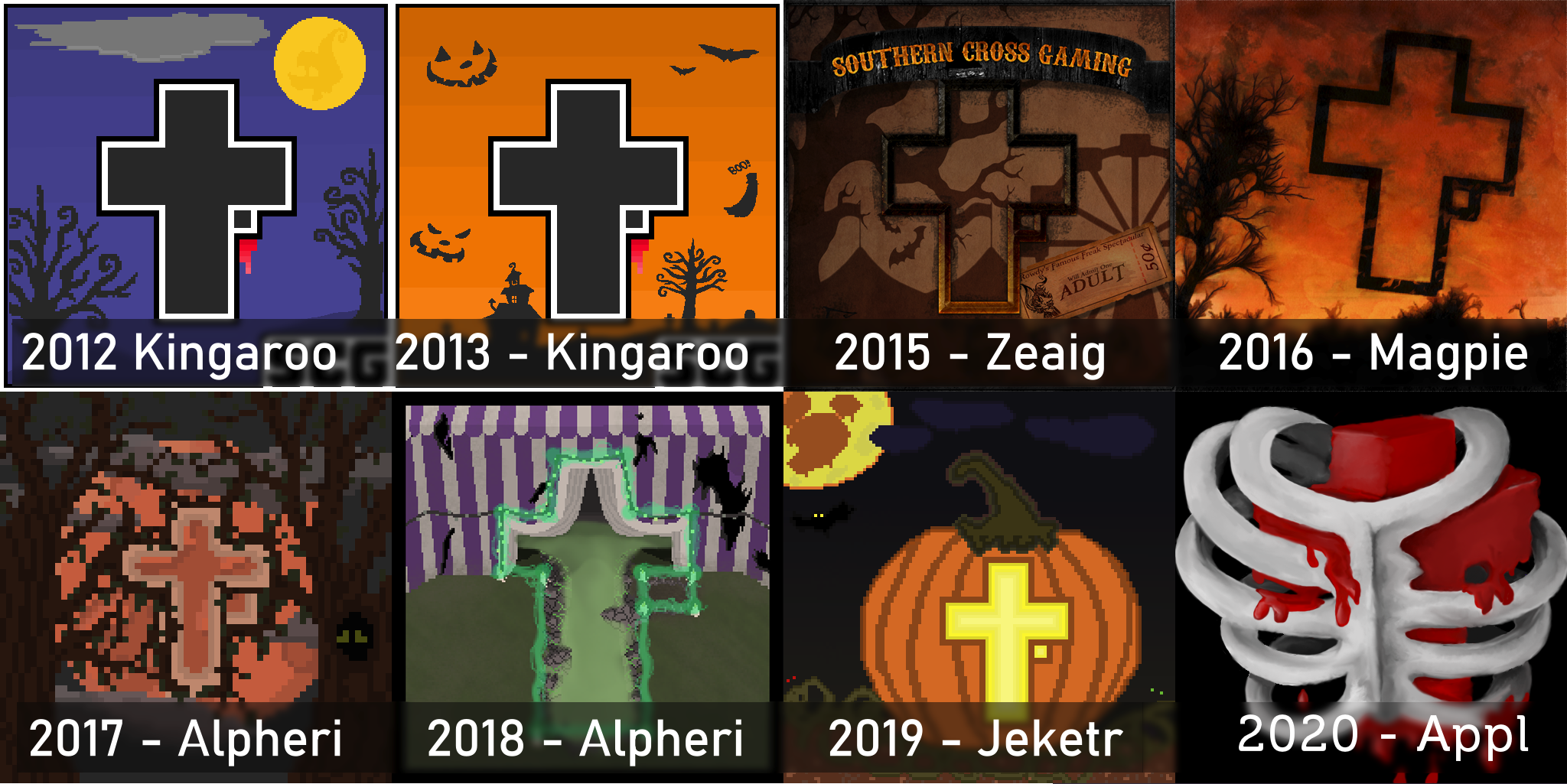 =PSA= Valve disabled your sprays! Read here on how to fix it!

Thursday's TF2 update introduced a rather annoying change. Player sprays are now disabled by default on community servers. They were previously only disabled on Valve servers.

However, to fix this (assuming you want to!) There's just one setting you need to adjust!

Alternatively, the cvar for this is cl_spraydisable, you'll want to set that to 0.

NOTE! If you had sprays forcibly enabled in a config prior, you'll still need to do this. They changed the previous cvar from cl_playerspraydisable to cl_spraydisable

Also keep in mind, if you'd like to easily create wonderful high-quality sprays, you should consider checking out the Spraymaker 5000!

Bark bark!
I got a special letter, an update! Here are the details!

-Fixed a TF2 problem where clients could get stuck in spectate upon joining a team that wound up being unbalanced {c:#2180AC}(Chocolate,Rainbow){/c}

Probably the oldest bug in TF2, if enough people join a team at the same time, you may find yourself trapped in spectate. But you're actually in an unassigned team, which breaks the use of the changeteam (your period key) command.

Forcing you to have to use the jointeam X command, spectate, or open the motd (Doesn't always work). Our fix will attempt to reopen the team join menu in this event, allowing you to get on a team.

This has been an SCG Service update! You can check all our important updates on our update page here!
Mann Co. would totally sign off on this if they could! Report any bugs or suggestions here!

Little things is a major SCG update designed around the idea of quality of life fixes. The inspiration came from an idea I had a few months ago while playing on our MVM server. A player had accidentally used their canteen before the round had even started, and I felt so bad for them in particular that I had spent that evening coming up with a plugin that could prevent accidental canteen usage.

When I described it to others, it was praised as a quality of life thing. Normally when I work on things, it's usually some big feature or a bug fix or something. I never really thought about little things, so that was the goal this time around.

There's two parts to this, the SCG website, and our TF2 servers.

###Team Fortress 2 settings
Let's get this out of the way!

I have introduced a new settings page that allows you to adjust settings for the TF2 servers! This page works even if you haven't been on the servers yet, as long as you have your Steam ID associated with your profile. If you are a donator, you should also be able to adjust your donator settings here as well! There is now a page for your personal stats, though right now the only thing that we track is your personal victories in MVM. It is used as a checklist to determine what missions you have and have not yet completed! When you log in to the Jewelbox, you are now taken to your home page. It acts as a small portal to some of the features of the website, as well as a list of suggestions to help get you started! The website also offers new achievements! This is a new feature, and there aren't a lot of them yet. The long term goal is to provide some goals for people to work on while being apart of SCG.

These features above were designed with the goal of providing more for the community as it is, but also built in a way to scale to any and all future plans. They may not seem super exciting, but at the very least, this is all personal practice for me in my own skills as a designer so...there's that!

###Other updates
The following are a list of fixes and otherwise for the SCG site itself.

-The Member directory now has a proper search function
-Assorted graphic changes to the Jewelbox
-You can now @ people in posting pages
-New notifications system, however at the time isn't completely implemented
-Profile activity feed is now up and working
-Auto saving for discussions are now totally implemented!

###All talk for spies
All talk has always been a small problem for spies, a spy talking while cloaked still leaves a speech bubble...until now. Thanks to a plugin developed by Fraeven and myself, spies no longer retain their speech bubbles when they cloak and talk.

###Typing bubble for all
From the same plugin, we've also implemented a bubble for those who are typing. This bubble first appears after your first chat message, and lingers around for a moment until it leaves on its own or you start to move around. We've also implemented a feature where you can open up chat, press space and enter, and have your bubble appear without having to send the first initial message.

###Donator menu rework
The donator menu now allows you to access and adjust everything all at once. You can set your kill effects, toggle your rainbow text, and more all from one menu.

###Clientprefs rework
Clientprefs are like cookies for you on the servers. They store things like your kill effect setting, your usage of ghosts in rainbow, so on and so forth. These settings have always been on a per server basis, but now they use one central database you can adjust anywhere. Saving a setting for one server carries it over to every other. You can also adjust some of them using the TF2 settings page listed above!

##So what's next?
This was a fun series of projects to work on! But there's always more to do! Aside from the help I get occasionally from Fraeven, this is mostly a solo project! I do a lot of maintenance and upkeep, and because of this, I'm often a little confused or overwhelmed on what I have done, need to do, or have yet to plan out.

My organization is a little questionable, but I am learning more every day! My next few projects won't be so exciting, there's a lot of code cleanup I want to do which isn't the most fun thing to talk about. But the next bigger project will be work on our Saxton Hale server, so stay tuned!

If you'd like to help support me and SCG, please consider checking out our contributions page! and feel free to help report any problems, bugs and suggestions here or anywhere else! Oh, and the full patchnotes for the TF2 update are here below!